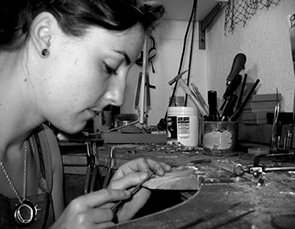 Islay Spalding is a jewellery designer/maker, based in Dundee, Scotland, who is inspired by the colourful, the surreal and the real that surrounds us.

A believer in quality craftmanship and meaningful design, Islay's pieces are made and finished to the highest standard, each carrying her makers mark and Edinburgh Assay Office Hallmark.

Inspired by the thoughts, ideas, colours and forms found in European Surrealist and Abstract Art; especially the works of Desmond Morris, Yves Tanguay, Joan Miro and Wassily Kandinsky. Silver is combined with hand-dyed resins, and more recently hardwoods, to form colourful, chunky sculptural shapes that are then translated into rings, pendants and brooches for the Biomorph, Biocube and Small World Collections. Islay also works with 18ct Gold, precious and semi-precious stones to create her narrative Jabberwocky Collection and rough and sparkly Flotsam and Jetsam pieces and Treasure Rings. Offshoots from these works have spawned to create sub-collections of their own, Sweet Sweet Jewellery, Thritty Pings, Oddgons and Angulars, each growing and evolving in their own ways.

Islay is a competing snare drummer with the MacKenzie Caledonian Pipe Band and has the unusual credentials of being a qualified British Army Drum Major (Army School of Bagpipe Music and Highland Drumming, 2010), she therefore knows how to wear a kilt and how to tell others to! She also plays the fiddle and has a keen interest in Scottish folk music and Gaelic culture. A big part of Islay's ethos when designing Kilt Pins is to marry up this 'tradition' with contemporary design and create something that has the symbolism and timeless appeal of traditional Scottish Highlandwear but with a fresh, modern approach. Elements such as grooves and notches to signify dates, geographical features, pieces of music or re-workings of clan crests are some of the ways Islay brings that personal meaning to the design, making it completely unique to the wearer.

As well as this she is a lover of making, her workshop and tools are her heaven.....apart from that feeling of being immersed in the Scottish landscape, achieved by 'research trips' hillwalking, camping and skiing. A continually fickle nature leads her to create unique items of jewellery, all parts of evolving collections that ebb and flow with time.

If you are looking for a special gift or unique accessory for yourself then please contact me for more information.

Website designed and maintained by Islay Jane Spalding © 2007 | Please email me if you wish to use any images on the site, Thank You!